Hang the code, and hang the rules! They’re more like guidelines anyway. – Elizabeth, Pirates of the Caribbean

This week’s recipe is Peppermint Cream Puff Ring chosen by Caroline from A Consuming Passion. You can find Dorie’s recipe on Caroline’s post.

There are some guest stars joining Dorie this week. Let’s have a great big Tuesday with Dorie welcome for Mr Alton Brown and Mr. David Lebovitz.

OK, I’ll admit it. I strayed this week. I used Dorie’s recipe as more of a guideline, a suggestion if you will. We’d had a lot of whipped cream with our strawberry tart last week, so as much as I like whipped cream, I was actually kind of . . . sick of it. Ice cream sounded good. Profiteroles sounded even better . . . with hot fudge sauce.

The farmer’s market in our town opened this weekend and, while there isn’t much produce available yet, they did have some fresh mint. Since I didn’t have enough mint in my garden yet, I bought a big batch and made mint ice cream from David Lebovitz’s “The Perfect Scoop.” If you’ve never checked out his blog, it’s a hoot. Here you can see the mint steeping in warmed milk. How could this not be fabulous? I also drizzled in bittersweet chocolate towards the end of freezing so that we would have mint chocolate chip ice cream. Did I mention the hot fudge sauce? 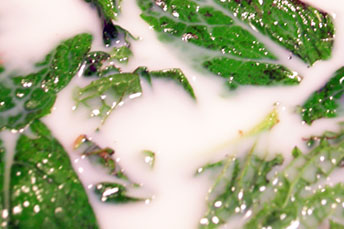 I had my ice cream made, but I still couldn’t work up any enthusiasm for making the pate a choux. I was really tired this weekend. I’ve made cream puffs before so I knew it wasn’t a big deal. Granted, that was 25 years ago, but I’d still had success. But I became leery when I read the problems people were having with Dorie’s recipe. I didn’t have enough energy this weekend to contemplate failure.

I visited my go-to source for food science, The Good Eats Fan Page, where I can find the transcripts to most, if not all, of the episodes of Good Eats. For a recipe like pate a choux, sometimes I like to know why I’m doing something in addition to how to do it. I found just what I needed from the episode Choux Shine. Catchy title, eh? I used the transcript for all those hints he adds to his narration, plus, the recipe is also in Alton’s cookbook.

Even with Alton’s guidance my first batch collapsed a bit straight out of the oven. So I also referred to the cream puff recipe in David Lebovitz’s book. His recipe bakes the puffs at 425 for 30 minutes. He also says you can portion the batter with a disher instead of a pastry bag.  So I kind of split the difference. The next batch went in at 425 for 15 minutes, and then 10 minutes at 350. That did the trick. I think they turned out almost perfect, if I do say so myself. Which I do. 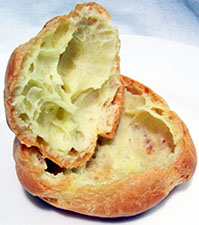 Finally . . . on to the hot fudge sauce, which I also took from David’s cookbook. I was able to stop eating hot fudge with a spoon long enough to drizzle some over a mint ice cream filled cream puff. The cream puffs and the ice cream were just an excuse for creaeaeaemy, waaaaaaaaaaarm, rich hot fudge sauce. 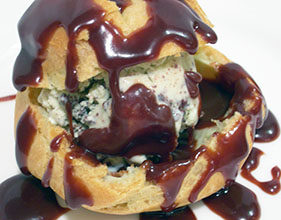 Imagine my surprise however, when we didn’t really like the mint ice cream. It was just a little too grassy tasting. I was so looking forward to this, but it just tasted kind of pasture-like and weird. Fortunately we also had vanilla waiting in the wings.

Anyway, after a 25 year hiatus, I’m back on the cream puff bandwagon and will not shy away from making them again. Right now, I’ve got to go eat some hot fudge.

Stay tuned for next week’s recipe:  Mixed Berry Cobbler chosen by Beth from Our Sweet Life.